Let’s wind the clock back to the Lehmans “moment”. Some $25-30TRN wiped off the global economy – 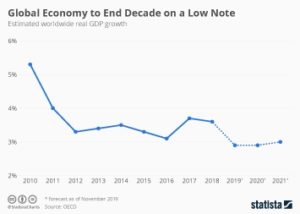 estimated by Henry Liu at $34TRN peak losses in 2009 even on a very rudimentary scale. According to Liu, to get back to where we were pre-Global Financial Crisis (GFC) would require something in the order of a sustained compounded 5% Global GDP annual growth rate for a period of some 10 years. That level of growth would be unprecedented in recent times, and certainly has not been seen post-GFC, as illustrated. 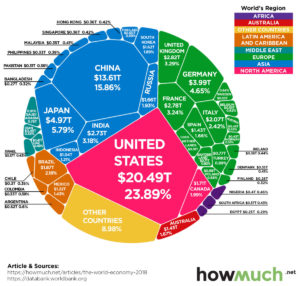 China, the global #2 economy, is in the throes of the Coronavirus – which looks set to damage 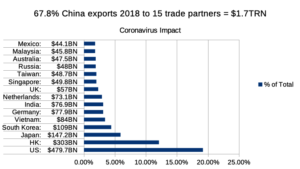 severely Q1 2020 (and quite possibly hit Q2 as well), and with the Eurozone heavily reliant on China for its huge export market (with Germany a particular case) – not to mention the US – the ramifications are huge. China’s economy has long been the source of concern to discerning strategists and macro-economists – not least because the availability and clarity of data emanating from the Chinese government is not regarded as reliable. This lack of trust has been exacerbated in the way that Chinese authorities have lacked transparency over the true impact of Coronavirus. But for 2020 there is going to be no hiding place for potentially massaged data from China. Global dependence on China is immense – in 2018, 67.8% of China’s exports were to 15 trade partners, totalling a massive $1.7TRN in trade.

The global economy is, after all, hardly in a rosy state post-GFC. What, for example, have we witnessed post-GFC? Central banks with zero ammunition after years of Quantitative Easing (QE). The stark result: US Federal Reserve Bank has interest rates at 1.25% – very low levels – whilst the European Central Bank (ECB) has interest rates at -0.5%…! This means that the central banks issuing the two most transacted global currencies in the two most powerful economies – US with the US Dollar and (aggregated) European Union with the Euro – have very few policy tools at their disposal. Aggregated, although not a sovereign state economy like the US and China, the Eurozone still remains the global #2 economy, after the US and China. US and European Union inter-dependencies with China – in view of the Coronavirus outbreak – are massively significant. 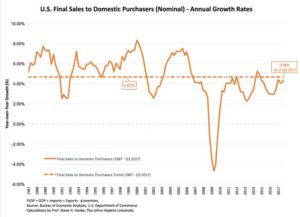 relative excess of poor quality debt, because debt at low levels of interest is relatively cheap to service. Concurrently, there is a tendency for investors to take on more aggressive speculation and increasing leverage. If interest rates remain artificially too low, demand “bubbles” can result. The end-result, as well illustrated by Prof. Steve Hanke of Johns Hopkins and Cato Institute, can lead to exponential damage in the form of massive funding failures – not unlike the global house funding crisis that occurred during the Global Financial Crisis/Global Recession. As Hanke rightly notes, the Greenspan-Bernanke Fed reign saw the Fed over-react three times, causing three demand bubbles – with the mother of all bubbles provoking the Great Recession.

As a result, we are now seeing the Credit Ratings Agencies (whose ratings – although arguably far more in line with reality than was the case leading up to the Global Financial Crisis – still should be taken with an enormous pinch of salt as market sentiment deteriorates over the Coronavirus) downgrading to near-junk or junk status corporate and sovereign bonds. As Daily Telegraph’s ever-alert Eurozone deflation/”doom loop” tracker Ambrose Evans-Pritchard has noted, the auspices are not good – Basel, IMF and US Treasury contend that leveraged loan quality is now worse than pre-GFC – he notes, rightly, that some $3.4TRN near-junk BBB rated bonds – a 5 times increase since 2008 – sit just above junk status. Talk about precarious.

This in turn means that major corporations that might otherwise be regarded as adequately funded are carrying potentially toxic funding (at near-junk, or junk levels) which will be highly vulnerable to default in the event of a major global market downturn. US, China and the Eurozone contain sizeable, multi-billion dollar companies which are already being downgraded by the Credit Rating Agencies – and this is not good for a global economy already fragile enough, particularly if market panic sets in – with investors prompting firesales to avoid outright default.

S&P published a breakdown of “Weakest Links” in February 2020 in the US leveraged loan market, reflecting the impact of downgrades on credit quality, which surged to 145 in Q4 2019, up from 125 in September 2019 and 95 end-2018. These are defined as loans in LCD’s universe assigned by S&P a corporate credit rating of B- and below and a negative outlook. Strikingly, the following goods-driven sectors saw the highest rise in “Weakest Links”: Healthcare, Computers & Electronics, Retail, Food & Beverage – worrying from a Coronavirus and China-dependence perspective. 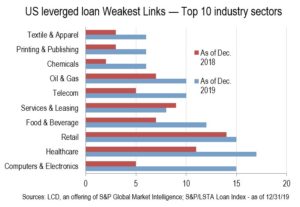 Notably, not only Computers & Electronics are a concern in China-dependence terms for the US. According to the US Council on Foreign Relations, there is a correlation to the coronavirus and China and the US which relates to Healthcare, with a US Dept of Commerce study finding in that 97% of all antibiotics in the US come from China, and that 80% of all active pharmaceutical ingredients (API) used to make drugs in the US allegedly come from China and others such as India. Substituting India for China is tricky as India relies on China for sourcing almost 75% of APIs in generic drug formulations, and China offers a 35-40% price discount relative to India.

Sadly, this is not all. With interest rates at sustained low levels, and a core desire on the part of the European Central Bank not to allow inflation to get out of control – a common approach across most central banks today – it is unlikely that we will see much interest rate movement from either the Fed or the ECB. Unlike all other central currencies, the Euro is politically, not fiscally driven, and the Eurozone’s Stability Pact and Fiscal Compact has led to ill-advised monetary policy measures, such as tightening policy post-Lehmans and then only applying quantitative easing when it was already too late and a deflationary spiral had set in.

One could argue that the ultimate panacea for a beleaguered Eurozone, short on productivity would be fresh stimulus from the Asian Tigers in the East – but this looks like a very distant prospect in the aftermath of COVID-19’s ability to close down industrial activity and trade lines. After all, pre-Coronavirus, Germany returned a paltry 0.4% in Q4 2019, and things are clearly going to get far worse in Q1 – and quite possibly, Q2 2020 as the Coronavirus-led economic impact in China hits home.

Worse still, the US-Eurozone-China nexus means the spread of the Coronavirus – never mind air travel – is necessarily linked to migration and movement across contiguous frontiers. The size of populations in proximity to Coronavirus-disaster hit China mean that there is a high likelihood of spread of infection. As countries try to close borders to counter the full spread of COVID-19, the macro-economic impact is profound – with air, shipping and land freight lanes severely affected by this logistical disruption on a global scale.

In extraordinary fashion, China has attempted to downplay the impact of the coronavirus outbreak, causing havoc globally. Similarly, consensus-obsessed market commentators and timid policy-makers globally have failed to take immediate, affirmative action. With the impact that visitors from the most affected countries such as China, Iran, South Korea – have been given precious few travel restrictions in the initial weeks and months after the December outbreak occurred.

Rather than theorise endlessly about the macro-economic ramifications of the Coronavirus Outbreak, let us turn to some fundamental practicalities. Without physical access to markets, it is nigh-impossible for companies who manufacture or produce goods not to be affected by the mass shutdown of logistical access points, key manufacturing facilities around the world. When the Chinese economy represents some 15-17% of the global economy, and is readily used as the “Workshop of the World”, any sustained negative impact to China and its logistical, production capacity will be profound the world over. Naturally, it will require independent minds on the ground willing to transmit real-time data and information-gathering for the true impact to be revealed, and in China’s current climate of media control – not to mention widespread travel restrictions, this is not a given.

Global Sentiment Is Key – Panic is The Trigger

As with the Global Financial Crisis of 2007-9, the trigger to any sustained downturn will be market sentiment. If confidence in the global economy’s (in)ability to handle the coronavirus outbreak successfully falls drastically, then the exponential impact on the market values of companies and commercial activity will be significant. There is a very great danger that this will occur, and be very difficult to model with any great certainty in terms of timing, as the current geo-political climate is highly unpredictable, data from despotic, non-democratic countries is frequently misleading or non-existent, “fake news” widespread and often plausible. Not to mention the many potential areas of geo-political friction between the countries who populate the notional, modern-day “Silk Road” from China to Europe, and onward to the US.

Given the propensity of air travel to contaminate populations from one continent to another, as super-spreaders become potential global carriers on a sustained basis within 24 hours of global air travel, draconian measures will be required to restrict the spread of COVID-19 with any level of effectiveness. Similar to poorly-underwritten debt when market conditions are unfavourable, contagion when pandemic (both market and health-related) can be a nightmare to quell when sentiment turns sour. In an era of super-quick transmission of bad news, fake or otherwise, and geo-political turmoil, the omens are not good. It goes without saying that leveraged funding in this deteriorating climate is starting to look very toxic indeed.