One could not make it up. The EU with Angela Merkel at its head is seriously trying to challenge US Extra-Territorial Sanctions over the pipeline Nordstream 2. This is a deliberate attempt by the EU and Russia to try to exploit a “wounded”, post-Impeachment President Trump. The problem: this is not about Trump – it is about a highly anti-Russia, anti-Iran US Congress. They successfully passed the legislation which will directly interfere with Nordstream 2 – and the legislation is ready for presidential sign-off.

The Republicans have a majority in the US Senate, so House of Representatives Impeachment on Trump is highly unlikely to be followed through by the Republican-majority Senatebefore a major election. Whether we like it or not, populism has, in recent years, consistently proven to win out over traditional diplomacy, consensual policy-making and multi-lateralism.

Nordstream 2 does not only implicate Germany – other EU Member States are entirely complicit in this, and this could backfire badly. Denmark, incredibly, although a staunch NATO member, has thrown itself into the fray. For a number of reasons, this could be a strategic error with unintended consequences. Firstly, US ongoing strategic support in the Arctic (namely Greenland) allows Denmark to pay much less towards NATO than it should. Attempts to challenge US Sanctions policy by facilitating Nordstream 2 will not go down well in Washington (Congress will take note – their view is decisive).

As illustrated in “CROSS-BORDER SANCTIONS & AML” scores of companies left Iran in 2018, fearing the impact of the US re-imposition of full sanctions after it exited the JCPOA, or Iran Nuclear Deal. The JCPOA has been utterly misunderstood by the EU from the start – most of the “non-nuclear” sanctions from the US did, as we all know, remain intact even after Implementation Day in 2015. The EU’s Mogherini and fellow signatories to the JCPOA were sufficiently misguided to believe that the market to Iran was “open” – eyewatering fines from the US have ensued as numerous sanctions breaches have occurred. The only winners are grandstanding politicians – EU and non-US firms have once again paid the price for their short-sightedness.

Angela Merkel – in full lame duck mode as she sees out the final acts of her German Premiership – has been made the clear fall guy by the EU. In a final, desperate measure to leave a legacy, one might add. After all, EU diplomacy and strategic foreign affairs input have been so lacklustre to date – as the EU has been routinely dominated by the US. The EU and German economy are in crisis – their inability to understand the strategic nature of US Dollar dominance, its Extra-Territorial reach, and hold on energy distribution has led to this. Germany is desperate to shore up oil & gas supply after Libya, Iran and Russia were US-Sanctioned to oblivion, and to the utter detriment of their people. Germany’s current position on Nordstream 2 and Russia starkly contradicts their strategic positioning as member of NATO. 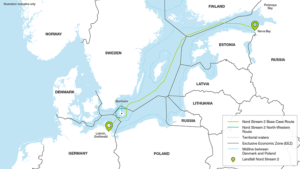 The challenge is clear. Not since the EU’s Chris Patten successfully argued against US extra-territorial measures in July 2001 has such a request from the EU been successful. Even then, this was only temporary and highly fragile – the 9/11 attacks and subsequent USA PATRIOT Act, full launch of the US Sanctions regime and “War on Terror” with its major allies (including the EU) put paid to that. BNP Paribas, at the time the 5th largest bank in the world, famously came to Washington, with French President Hollande, claiming: “…We broke no EU nor French laws…” It still ended up paying some $8.9bn in fines for US Sanctions breaches – a number which rose to some $9.3bn when all costs were paid out. Previously, the highest sanctions fine had been HSBC in 2012 at $1.9bn.

With constant Eurozone lack of productivity, strategic and foreign affairs challenges, lack of monetary policy bite (Euro), the European Project and Eurozone construct is now in a desperate state, some have ventured, teetering on the brink. With Nordstream 2 US-sanctioned into the dust – what is the future for the beleaguered EU?

No Risk Manager worth their salt will agree to proceed on a venture like Nordstream 2 with no hope of protection from US Sanctions enforcement. US fines for Sanctions, money laundering and due diligence/KYC offences came to a whopping $23.52bn (source: Fenergo) from 2008-18 – an eye-watering 91% of all global fines in terms of value. The US Sanctions enforcement regime is tried and tested – since 1996, successive EU Blocking Statutes have failed to offer any true defence to US Sanctions, and the ineffectual INSTEX designed for Iran will not change matters. The Iran Nuclear Deal is a classic case of failed diplomacy which has – and will – cost firms and investors a fortune in US Sanctions penalties.

The EU remains obsessed with the “Neo-Westphalian” principle that the US should not be able to operate in Extra-Territorial fashion, outside of its borders. Whilst this concurs with legal international norms, this maxim was blown out of the water by the US response to the 9/11 attacks. Much of the US Sanctions system is rooted in the OECD’s FATF Recommendations of 2012 and previous – namely fundamental money laundering typologies – and most US Presidential Executive Orders and Congressional-driven legislation are supported by United Nations Security Council Resolutions. The bill for this misguided EU approach is $23.52bn and counting. What is the point?

Angela Merkel and Mahathir Mohamad of Malaysia, Rouhani of Iran, Putin of Russia – along with the EU – may see different on US Extra-Territoriality. But their views are based on utopian theory – not fact. US Sanctions enforcement is real, and it has already cost firms and governments a huge amount. Remember: Iran was designated by the US President Obama in 2011 via Section 311 of the USA PATRIOT Act. This effectively means, barring very isolated exceptions, that Iran is prohibited from doing business with US firms and US Dollar -denominated transactions. Secondary US sanctions make the situation even more complicated for those wishing to do business with Iran. North Korea was similarly designated by the US President Obama in 2011. As US policy expert Norman Roule has pointed out recently, US policy on Iran is largely unchanged since the days of… President Jimmy Carter.

As ever with the EU, political ambition, unfortunately, far outstrips the reality check. US Congress has consistently voted unanimously in recent years to target Russia (as well as Iran, North Korea etc) in Sanctions terms and there is nothing that the EU, nor soon-departing Angela Merkel of Germany can do about it.

Denmark and the Nordics need to be far more careful – facing such trouble in the Nordics over Baltic money laundering which will inevitably lead to massive US Sanctions fines which look to top $10bn+ for Danske Bank alone – given the size of “suspicious” transactions – at c. $230bn – for Danske Bank. With SEB, Swedbank, Nordea and even Den Norske Bank somewhat involved – Handelsbanken less so.

EU Commissioner, (Denmark’s) Margrethe Vestager, has already incurred the wrath of Washington by going after major US tech firms on anti-trust. Major fines or market isolation for Nordic banks will not be reduced if the Nordics are complicit in US Sanctions-busting Nordstream 2. This looks to be a sad epitaph for a beleaguered EU – led by spokesperson, German Premier Angela Merkel. Like her entirely wrong-headed immigration policy of recent years, this looks destined to fail before it has even got off (or under…?) the ground… Expect massive US fines on firms who dare to proceed with Nordstream 2 – and further economic isolation for the accessories to the US Sanctions breaches which will inevitably ensue.