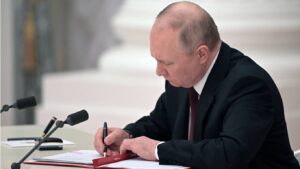 The growing list of foreign investors cutting ties with Russia and decrying its invasion of Ukraine is set to face difficulties divesting from the country amid Moscow’s capital controls and sweeping sanctions imposed on Russia by Western governments.

The Russian government has said that it will temporarily stop foreign investors from selling their Russian assets as major energy groups, including Equinor, Shell and BP, announced plans to divest from their multi-billion dollar interests in the country, while several manufacturers and services companies have already suspended their Russian operations.

“In the current sanctions situation, foreign entrepreneurs are forced to be guided not by economic factors, but to make decisions under political pressure,” Russia’s prime minister Mikhail Mishustin told a governmental meeting on March 1, according to an official statement.

“To enable businesses to make informed decisions, a presidential order was prepared to impose temporary curbs on exiting from Russian assets,” he said, without adding details as to whether the curbs included both foreign portfolio and direct investments.

Moscow has taken other measures to stem capital outflows in response to Western economic sanctions, including a restriction on foreign currency transfers out of Russia. Trading of equities on the Moscow stock exchange also remained closed for a third day in a row on March 2.

Numerous institutional investors with links to the public sector, such as US public pension funds and sovereign wealth funds in Australia and Norway, have also announced plans to divest from their Russian holdings. Global SWF estimates that foreign state-owned investors hold $44bn worth of Russian investments, equivalent to 0.14% of their capital.

While clarity on some Western sanctions remains to be seen, including which banks will be excluded from the Swift messaging system, experts say companies will face significant hurdles to divesting amid Russian capital controls.

“It’s a double-edged issue,” says Joshua Ray, a London-based partner at law firm Rahman Ravelli, who advises international corporations on compliance with sanctions. “Russia is trying to stem the bleeding: it is going to make it really difficult for people who are looking to quickly exit out of Russian investments.”

Foreign players in Russia’s massive extractive sector, which has an accumulated stock foreign direct investment worth over $116bn, according to Russian central bank figures, are particularly exposed. This is followed by foreign manufacturers ($103.8bn) and wholesale and retail traders ($96bn).

ExxonMobil announced its intention to discontinue the Sakhalin-1 project, a joint venture it operates on behalf of a consortium of Japanese, Indian and Russian companies. The US oil major had also previously announced intentions to invest $5bn to increase oil production on Sakhalin Island, but will now halt any new Russian investments.

“Companies are likely to treat assets in Russia as frozen and illiquid, doing nothing with them for the time being,” says Mr Ray, noting that they will likely be ring-fenced from their other investments. He expects it to be “a lengthy process of unwinding positions” held by foreign companies in Russia, particularly those in joint ventures.

Another consideration is that it will be difficult for companies to find buyers, as they will have to ensure that the ultimate owners of the joint ventures are not the Russian oligarchs listed in the sanctions imposed by the US, EU and UK.

“If there is a ban on the sale of Russian holdings, then investors will be caught,” says Iain Stewart, a financial services specialist and author of a book on cross-border sanctions. “I don’t really see a solution to that until we see some diplomatic solutions coming on board.”

While many companies had already reduced their exposure to Russia since sanctions were imposed in 2014 after its annexation of Crimea, Mr Stewart notes that the prospect of frozen assets is an “imminent concern” for investors.

Although Russian oil and gas exports have thus far been spared from the new sanctions imposed by the US, EU and UK on Russia’s financial sector, the invasion of Ukraine has already sent shockwaves through the energy markets. Significant supply chain disruptions are also already being felt, particularly by manufacturers reliant on parts produced in Russia and Ukraine.

This article is sourced from fDi Magazine – original article HERE