Joe Biden’s tenure as 46th President of the United States has been characterised by a level of spin and media protection not seen in Western circles since the pre-Iraq war days of former UK Prime Minister Tony Blair’s acolyte Alastair Campbell. No sooner had the highly-contested $1.9 trillion mega COVID-19 stimulus package surprisingly sneaked past the US Senate (Vice-President Kamala Harris had to intervene with her casting vote to ensure it passed), than the US media started back on the “Trump Impeachment” story. President Trump’s final weeks in office were likely the most self-defeating in (living) memory for a sitting US President. But former President Trump remains just that – and an impeachment trial on a former President seems somewhat churlish – at least outside of the, increasingly, highly tribal and inward-looking US political quarters.

Perhaps inevitably for the Biden Administration, the spin surrounding the benefits of the $1.9 trillion stimulus package is not being bought by everyone. Major economic, senior market commentators are voicing serious concerns about the massive COVID stimulus package stoking inflation precariously. None other than former Democrat US President Bill Clinton’s economic policy guru, namely former US Treasury Secretary Lawrence Summers, has spoken of the danger that Biden’s $1.9 trillion package could risk sparking: “inflationary pressures of a kind we have not seen in a generation”.

On the face of it, it would seem entirely predictable that a Democrat US President should attempt to redistribute wealth in the teeth of a global pandemic which has caused untold economic damage, only exceeded, in terms of devastation, by two World Wars and the Great Depression. Particularly as his new US Treasury Secretary, former US Federal Reserve Chairman Janet Yellen – is known to favour Keynesian-type stimulus. Yet few truly expected Biden’s full package to be passed by US Congress. On the Democrat Left, there is even criticism that the $1.9 trillion stimulus was not larger. With still very little clarity as to how this is to be funded.

Whilst wealth distribution may be a cornerstone of US Democrat policy domestically, the wider ramifications of what this might do to the US – and by wider extension – other world economies affected by the US economy, US dollar dominance, US dollar-denominated commodities prices and US capital market movements, US foreign policy via economic sanctions – could be profound and wide-ranging.

So – what are the potential dangers of overheating the US economy with a $1.9 trillion stimulus following hard on the heels of the previous $900 billion package? In many ways, this could amount to the perfect storm in terms of inflation. Constrained economies, savagely cut back in terms of productivity and output by the ravages of a global pandemic, may find themselves unable to supply eager consumers whose spending power has been suddenly unleashed.

Not only does this relate to any government stimulus package – which, in the case of the US, is arguably unfunded – but also the pent-up savings of global consumers who have been restricted from travel, regular spending by the severe restrictions brought on by the global pandemic. The outcome could easily be a massive surge (or inflation) in prices – as supply is hopelessly unable to keep up with pent-up demand – what economists commonly refer to as the “output gap”. The policy backlash could be that governments are force to raise interest rates to temper an overheated economy, with potentially disastrous effects.

The counter-argument from the pro-stimulus, now coined “New Keynesian”, or “Modern Monetary Theory” quarters, is that the global economy has gone through a deflationary period, and that with sustained low or negative interest rates, the risk of inflation remains low. That said, there has been enough irrational exuberance, sentiment-driven capital market participant behaviour – particularly from the retail side of late – along with continual populist expressions of discontent – as to suggest that consumer responses could be extreme. Moreover, due to the scope for mass media information exchange via social media, this could be coordinated in considerable numbers. There is a level of unpredictability at play here that could lead to a knee-jerk reaction for economic policymakers – in the form of higher interest rates – which could easily lead to a sharp inflationary impact. 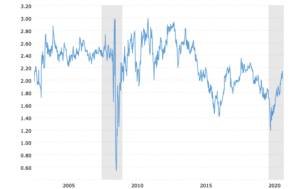 US inflation expectations are a decent measure of the prospects of inflation. The US Federal Reserve’s 5-Year, 5-Year Forward Inflation Expectation Rate indicates that US inflation expectations five years from now exceed even what they were before the global COVID-19 pandemic hit in early 2020. All that a $1.9 trillion stimulus package for the US economy is going to do is merely fan the fire of inflation expectations. Given the global impact of the US economy, the US dollar on geo-political, geo-economic, commodities and capital market, currency market stability and price volatility – any inflationary impact on the US economy is bound to have an impact on those sectors, entities, governments, investors and consumers directly or indirectly affected by the US – on a global scale.

In one key area which is being touted as a critical forward indicator to post-pandemic economic revival, namely a country’s COVID-19 vaccine programme, the US, along with the UK, have performed relatively strongly in global terms amongst a notional cross-section of larger global populations, sizeable economies for which there is data available. (It should be noted that there is no COVID-19 vaccine programme data currently available for larger economies: Japan, South Korea, Australia; or the more populous: Pakistan, Nigeria, Bangladesh, Philippines, Ethiopia, Vietnam, Egypt, Iran, Congo Dem. Rep., Thailand – hence their absence in the selected sample.)

From a demand and particularly a supply side perspective, it is therefore worth noting the progress of vaccine programmes globally across populous and developed nations, as any pent-up demand would need to be met with sufficient supply. Which can only realistically be attained if economies, sectors globally achieve greater supply side capacity to meet the increased demand and, it is to be hoped (though by no means a given), greater productivity. 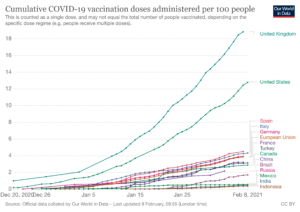 The backlash from a merciless US media should this Biden $1.9 trillion stimulus package backfire could be savage and unrelenting, although it may well be that the honeymoon period for President Biden continues a little longer before the full inflationary impact of such excessive stimulus fully hits home.

For a constrained global economy with so many ties to the US – the world’s largest economy with the most developed capital markets, easily the largest foreign exchange and reserve currency, the US dollar, with its intrinsic link to commodities markets – the inflationary impact could be profound. Not to mention highly counter-productive to a global economy in dire need of a helping hand as it rises, tentatively, from the ashes of a global pandemic.

The World Bank estimates that the global economy contracted by 4.3% in 2020, and the effective figure (based on prevailing global GDP projections before the COVID-19 outbreak) could be as high as a 6.6% contraction in GDP – or some $5.6 trillion – based on prevailing pre-COVID-19 assumptions of some 2.5%. This takes COVID-19 damage into the realm of the two World Wars or Great Depression scenarios – the global recession that has resulted is only exceeded by these three catastrophic episodes – but this is as bad as it gets in relatively contemporary economic times. Over 2020-21, based on the World Bank’s data, it is no exaggeration to say that the global economy could conceivably end up with a GDP shortfall at the $10 trillion level – a staggering figure. The World Bank estimates global GDP for 2021 to be 5.3% below pre-pandemic projections – a huge shortfall of $4.7 trillion.

It is to be hoped that the various COVID-19 vaccination programmes (assuming, of course, that they ultimately prove a decent indicator of post-pandemic economic revival) keep pace with the sharp inflationary impact that Biden’s $1.9 trillion COVID-19 stimulus package may well trigger. Based on the relative success of the EU and UK vaccine programmes up to now, it would seem, sadly, that Ursula von der Leyen, and not Boris Johnson (disqualified, post-Brexit, on grounds of mere nationality), looks likely to continue to control the EU’s – to date, lacklustre – efforts on that front. Which could be significant given the EU’s size and reach in terms of the overall global economy and its post-pandemic revival, particularly with a US economy potentially overheating.

As eminent US Nobel Prize-winning economist Milton Friedman opined: “Nothing is so permanent as a temporary government program.”