The full impact of the Baltic money laundering scandal is currently playing out as numerous regulatory and prosecuting authorities and investigators look into the parties involved. At the core of the overriding international investment community’s concern is that European banks overlooked their exposure to US-designated rogue actors and allegedly facilitated transactions for them in apparent violation of US Sanctions and Anti-Money Laundering rules.

Nordic banks from tiny Northern European markets have found themselves particularly exposed to the international spotlight, with leaders from banks in the Nordic countries having had to step down, entire Boards replaced – after initially trying to underplay the impact of Money Laundering and Sanctions. Sadly, the “expert” feed from institutions – in some cases in highly conflicted markets – is to ignore the perfectly obvious precedence of multi-billion dollar US fines and pretend to look the other way.

Share price falls over the past 12-18 months for the major Nordic banks under pressure, such as Danske Bank, Swedbank, SEB, Nordea, Handelsbanken and DnB largely reflect international expectations of major fines. Yet the so-called expert institutional feed – often from the banks concerned – does not remotely correlate with this. There are still a majority of positive ratings and highly inflated valuations and target share prices on a 12-month basis – which often do not remotely reflect the prevailing uncertainty and international scrutiny for banks under US investigation, and a market suffering from reputational contagion.

So – what is missing? It would seem that coverage of the major Nordic banks has overlooked the need to discount major factors such as a realistic assessment of prospective US Sanctions & AML fines. Just as a rule of thumb, the proximity of the Baltic money laundering crisis to known, US-designated/sanctioned entities or individuals, geographies is more than enough reason to factor in the worst case scenario. This is because the US authorities only need to determine that “apparent” US Sanctions violations took place. Based on previous major fines, it would seem inevitable that Danske Bank and Swedbank’s “alleged” violations would lead to the fines priced in to the market of some $6bn for Swedbank and $10bn+ for Danske Bank.

With allegations this severe, and the BNP Paribas fine of $8.9bn in 2014 – which does not even reflect the size of alleged illicit transactions at Danske Bank – the sky really is the limit. However, some of the trading activity of major Nordic players – including Nordic banks – seems to suggest that the major Nordic banks are “too big to fail”. Clearly, these banks are large in Nordic terms, but not particularly huge in global terms – but in the small Nordic market context – they would qualify as Systemically Important Financial Institutions, or “SIFIs”.

As ever, the US enforcement issue is overriding – or should be overriding – all other concerns in such small (relatively speaking) markets. Global scrutiny and international spotlight on otherwise-perceived “transparent” markets is causing untold reputational damage and wider contagion across the entire Nordics and Baltics. So this really needs to be reflected more fully in the output of institutional analysts in the market. Not to do so just looks like deliberate collusion, or an attempt to mislead the market wilfully in order to protect self-interest – a perfect storm of smaller markets under international scrutiny caught in a conflict of interest nightmare on a global scale.

Unlike regular conflicts of interest in other markets, the Nordic market exposure to such issues is extraordinarily acute. Very often the same key families and industrial, commercial and corporate leaders sit alongside the very same government officials and regulators on the boards of listed companies, governmental and professional bodies, anti-corruption think tanks, industry associations.

Worse still, there is – as is frequently the case in continental Europe – a complex web of interlinked stakeholdings and dependencies – which make conflicts of interest liability a slam dunk for any litigator worth his salt with a large group of disgruntled international stakeholders looking to press a class action lawsuit. In typically extraordinary fashion, the mere concept of class action lawsuits has been dismissed and ignored in some Nordic market circles as irrelevant, due to the lack of successful class action lawsuits in the Nordic region over the years. But we are talking American rules not Nordic… 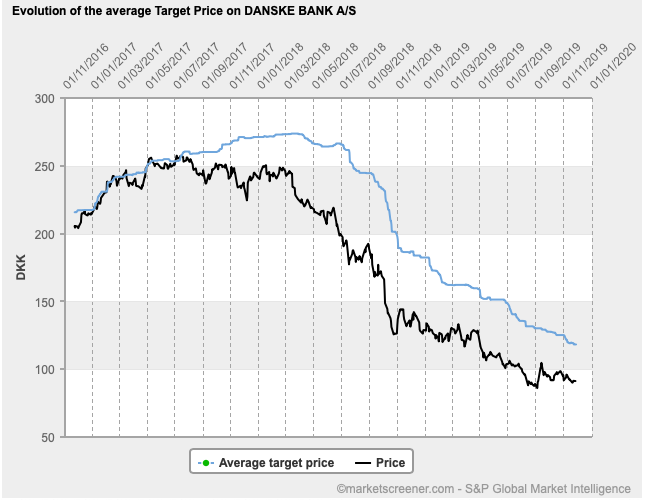 Astonishingly, many of these banks are being covered by (often EU and Nordic) analysts who continue to predict Buy or Outperform ratings on a 12-month basis, often with highly inflated valuations relative to prevailing share prices – for companies still under investigation and subject to the highest levels of scrutiny and uncertainty.

Looking at the coverage of some of the Nordic banks in detail does not reveal a particularly transparent account and certainly fails to reflect the reality that most international investors are seeing. Interestingly, all the major Nordic banks are exposed to the US dollar and the US market, and this places them in a potentially very tricky scenario.

For some, the spectre of the 2003 $1.4bn Global Settlement does not seem relevant as a factor. Yet some salient points emerge from this, such as the US concern about sustained Buy ratings – or positive recommendations – on stocks with consistently falling share prices. This is clearly the case for coverage of the major Nordic banks, and continues unabated. Whilst this might be a perfectly reasonable assessment over the shorter term – it makes little to no commercial nor reputational sense for coverage of stocks with consistently falling share prices to be denoted a “Buy” – with no apparent, sustainable share price upside in sight due to the continued uncertainty and downward share price pressure caused by ongoing international investigations.

Danske Bank, for example, seems to be treated as though the ongoing share price falls are simply not credible. There are plenty of grounds for reasoning that conflicts of interest in the Nordic market are preventing firms from publishing transparent, meaningful coverage about Danske Bank which directly factors in the potential of a highly probable $10bn+ US fine – if the allegations of money laundering and, highly likely, “apparent” US Sanctions violations are as credible as they appear.

To date, the institutional sell side coverage is indicating the following extraordinary view on Danske Bank. Although a “Hold” rating is generally regarded as a “Sell” rating in the market, it nevertheless typically – and by plain meaning – does indicate that investors should retain the stock for the time being, and expect flat to small upside (or even small downside) in share price performance. Danske Bank recommendations are currently: 7 Buys, 2 Outperforms, 8 Holds – 1 Underperform and 1 Sell.

This is hardly reflective of a bank whose share price lost c. 50% in 2018 and which is under sustained pressure due to ongoing investigations and international scrutiny – causing widespread uncertainty for an indeterminate period of time – as there is no fixed end to the scrutiny. Worse still, the specific target share prices over a 12 month basis are equally nonsensical. The current slew of expert advice from the institutional sell side has target prices for Danske Bank, trading at around DKK 91, of anything from DKK 81.25 to DKK 200. Trying making a consensus case out of that little lot. DKK 200 – seriously…???

For Sweden’s Swedbank down c.40% already in 2019, the coverage is not particularly clear. To date, there are 7 Buy ratings, 1 Overweight and 11 Hold ratings, with only 1 Underweight and 2 Sell ratings. Which begs the question – what is it going to take for the market to reflect the desperate state of depressed share prices amongst all (major) Nordic banks with some reasonable forward thinking? Expert analysts covering the Swedbank stock, which currently trades at around SEK 125, have target share prices on a 12-month basis of SEK 115 to SEK 242 – again, this spread (particularly the top end) is hardly credible given Swedbank’s share price performance over the past 8 months or so. And suggests that fines of up to $6bn or so – factored in by the market based on prevailing share prices, are not being taken seriously by institutional analysts. Which is astonishing, and arguably highly misleading. 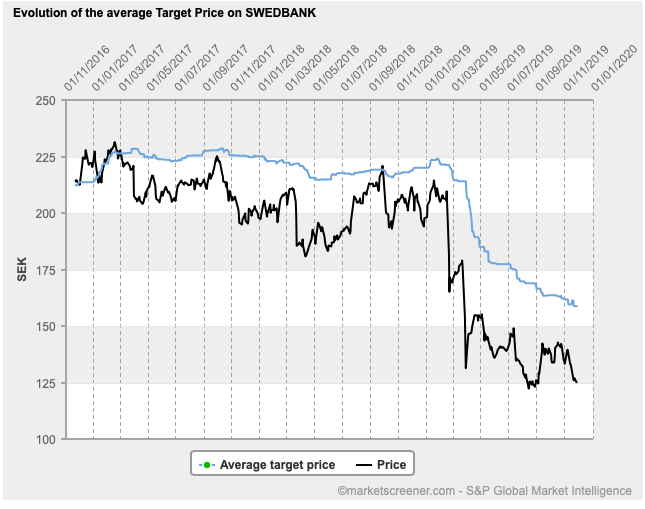 SEB from Sweden is another Nordic bank caught up in reputational contagion, after yet another news story broke tying it into the Baltic Money Laundering Scandal – where many EU, non-Nordic banks have also been allegedly implicated. Handelsbanken from Sweden, although not present in the Baltic markets, has been ordered by Denmark’s financial regulator to tighten its anti-money laundering, and Nordea is plagued by past issues in terms of its dealings with the Baltic region as well. The share price fell substantially (15% on the day) upon the announcement by SEB that the Swedish channel SVT had requested a comment on an upcoming documentary.

The veritable Sword of Damocles facing these Nordic and other EU banks is Bill Browder who has been going public with revelations about the major Nordic banks. Astonishingly, some Nordic commentators are questioning Browder’s motives, and even his credibility. Which is to miss the point entirely. Browder successfully lobbied for landmark Magnitsky and Global Magnitsky US Sanctions legislation – which now form part of the most powerful Sanctions & AML regime in the world. These measures are being adopted in the EU. Even more worryingly, key investigative journalists – the OCCRP and ICIJ – are clearly well on top of the story. The OCCRP crowned Danske Bank “2018 Actor of the Year in Organized Crime and Corruption”. Hardly a great basis for sustained, unremitting Buy ratings on Danske Bank, one would think..

The US SEC and FINRA are bound to investigate further with all the major Nordic conflicts of interest across industry, government, regulators. Without swift remedial action, the reputation of Nordic banking could be in for an even greater hit.